Joined Aug 17, 2011
·
4,686 Posts
I wanted to keep one thread to journal our experiences with breeding, pregnancy and raising a litter as a first time breeder.

Carma was bred with a few live breedings starting March 29, which would put her at almost 3 weeks pregnant, with puppies due early June. So far I have noticed some subtle physical and possibly hormonal related temperament changes. To me, she appears just a bit thicker around her mid section and seems to be losing her tuck up. She is acting much more aloof and hardly interested in other people or dogs in general. Its hard to determine if her food drive has actually gone up, since she is generally psychotic about food, but if it could get any higher, I would say it may have. She has vomited one morning so far. I started a thread earlier about raw feeding a pregnant female. She hasn't had any issues so far, but I will admit to being super paranoid about proper nutrition as she goes through this. She doesn't appear to be deficient in anything at this moment, but I worry about her calcium intake as we progress.

We'll be using an xlarge durawhelp, and I do plan on using a 'litter' type training for raising the puppies. We'll be working on setting that up within the next few weeks. I've seen a few different materials used for litter and am leaning towards using pellet based material myself, but would love to hear any other experiences that breeders have had with litter training. I personally can't stand the mess that wood chips leave sticking to everything, so I'd LOVE to avoid that if possible. And any ideas for toys and enrichment activities are appreciated

I work at a veterinary hospital and was able to run an ultrasound earlier this week, which was able to detect fetal heartbeats. We will be doing another at the end of next week to try and get a better idea of what we're dealing with 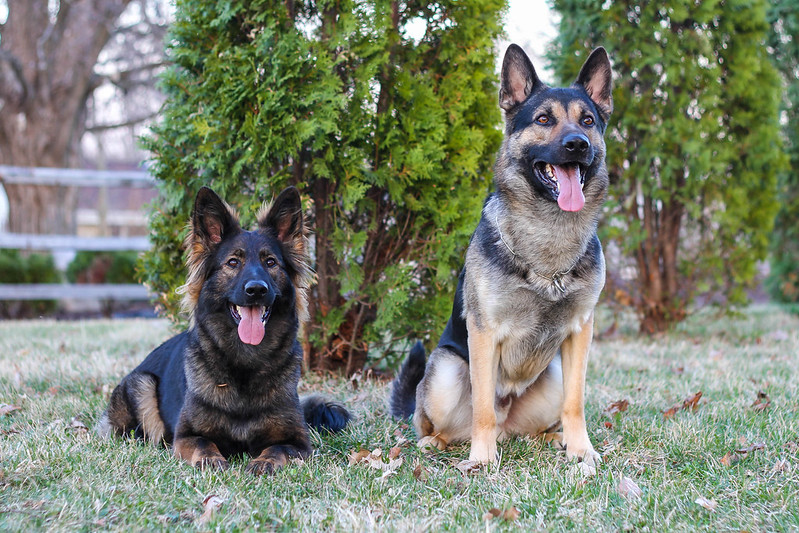 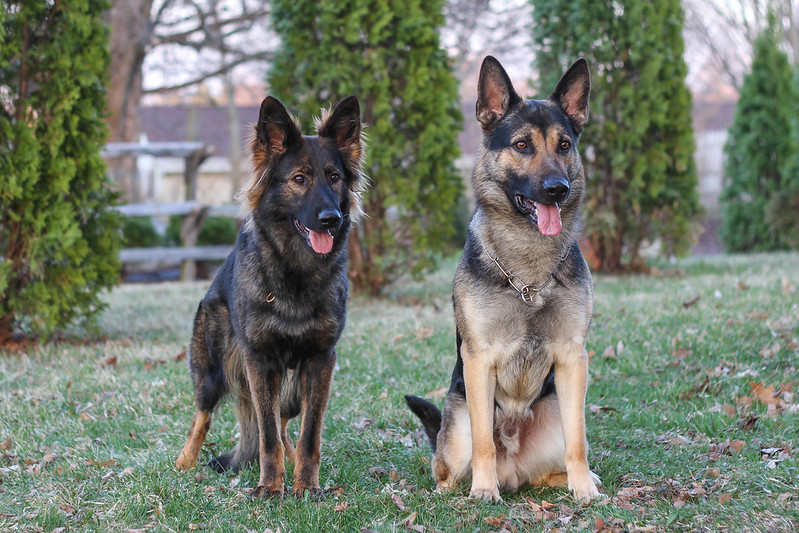 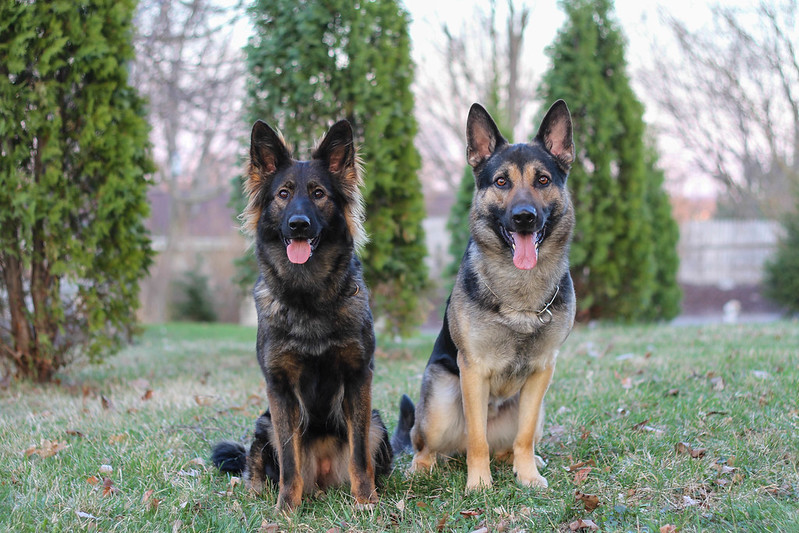 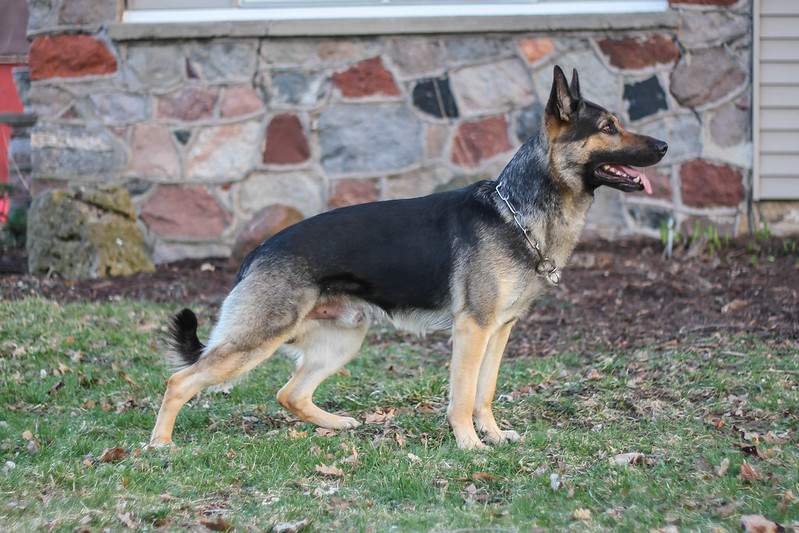 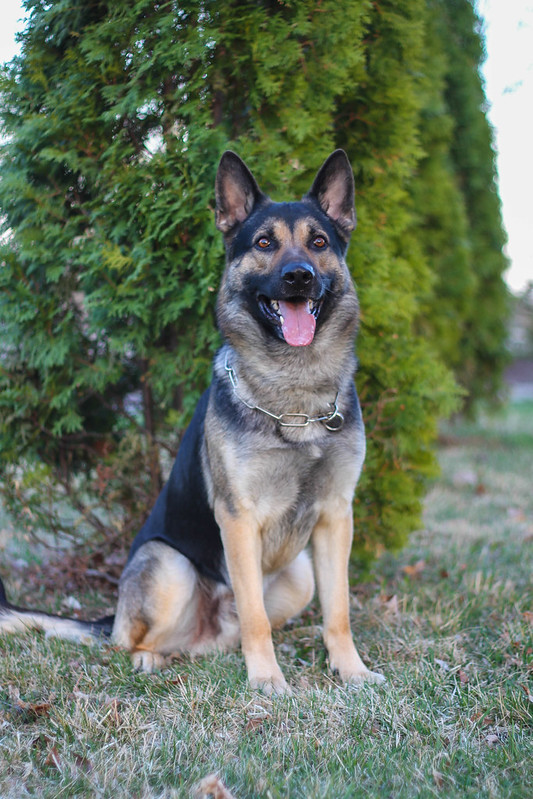 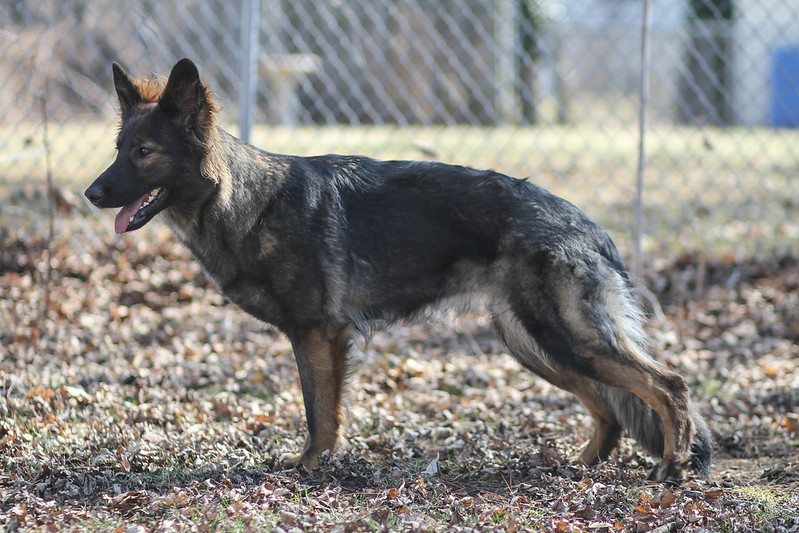 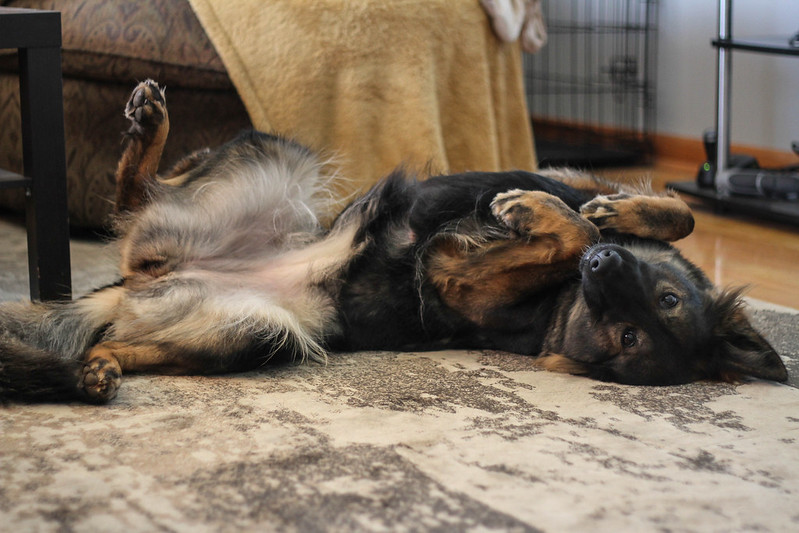 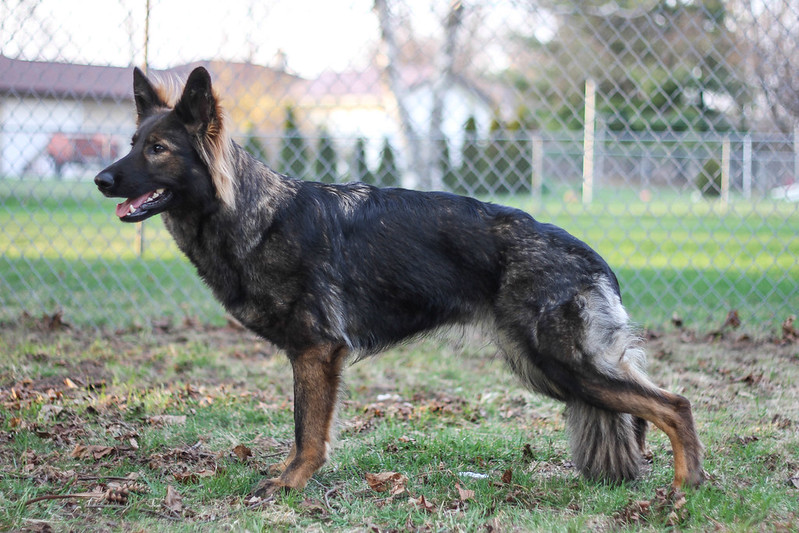 I'll have to get a new belly shot for this week during daylight hours this weekend. :wub:
► Show Full Signature
Feuergarten German Shepherds
Facebook.com/Feuergartengsd

Joined Nov 10, 2002
·
6,637 Posts
Love idea of the journal! Best of luck with everything and what great pictures of the two!
► Show Full Signature
Leesa~

Joined Aug 13, 2012
·
2,369 Posts
I'm so excited!! I've loved watching Carma grow up and seeing what an amazing dog she's turned into, to me she's perfect and everything I want in a dog so can't even put into words my excitement about getting a puppy from her. I may not be acting like it but that's only because I'm trying to hold it back in case she doesn't have a female for me. But trust me, my mom and husband are super annoyed how much I've been going on and on about it LOL.

Outside -- usually I carry them outside at about 3 weeks old for a short time every day, and then by 4-5 weeks old they are outside most of the day and in at night. Outside, I use cedar chips. They really aren't sticky like pine shavings and the cedar does naturally deter bugs. The cedar chips also prevents a muddy mess as it soaks up the rain before it has a chance to make huge mud pits.

The outside area usually has a crate half or two that the pups will use like caves, and a cot. Sometimes I use a wood dog house that the dam can get up on, to get away from them. For a while, I will put x-pens within a larger kennel fencing, which allows the dam to jump out and be away from them some of the time. But they learn fast to climb over x-pens.

The inside are has the whelping box, and a doggy door to a secure kennel. At first only the dam can go in and out. You can corral the puppies in their whelping box, until you can't. By then, they can carry themselves in and out on their own. I do cover the outside are with a sun screen to deter hawks. I worry about snakes, though we really do not have hardly any poisonous snakes here, nor, anything large enough to take on a pup, especially if the dam is anywhere near.

Joined May 17, 2009
·
8,913 Posts
I wish you luck and lots of pups! You have worked hard to get here and have gone above and beyond and I hope this all goes smoothly for you. Will definitely be following.
► Show Full Signature
G Wild Winds Zephyr of Cognac BH, HIC, NTD, ITD, CGN, TT
Wild Winds Archangel Raphael HIC, TT
XX z Weberhaus

Joined Apr 5, 2000
·
18,681 Posts
I have used the shavings in the past and switched to the pellets this time. They were FAR easier to deal with, BUT, I ended up with sawdust everywhere. I think I am still trying to get it all up out of my carpet. LOL

In the box itself I use newspapers under towels during whelping and then, once my girl is done, I switch to these whelping pads. They let the moisture soak through and give very good footing. Click on the link for the "ultimate Fleece". It is expensive to start, but lasts for years.

Joined Aug 28, 2014
·
3,659 Posts
Gator, what an interesting thread this is going to be! I look forward to more reports, photo's. Your dogs are lovely and well behaved. Enjoy
► Show Full Signature
"There is a lot to be thankful for if you take the time to look. Example.. I am sitting here thinking how nice it is that wrinkles don't hurt!". Author Unknown

Joined Jul 27, 2010
·
6,662 Posts
Love Gordon too. I'm not a pedigree expert for sure..but...( ), love the strong females and tracking titles in this breeding. Looks like an awesome start for your kennel Alexis.

Joined Dec 2, 2012
·
8 Posts
Alexis,
Thanks for sharing. It will be nice to see and hear about the experience of having pups!

Joined Nov 10, 2013
·
892 Posts
Excited! I have loved what I've seen of your girl, and I like the look of the stud. They both have some pretty intense stares when they're focused. Eee. Puppies are so much fun!

This afternoon's belly shot. It doesn't show off much, but I do believe that I am noticing a little bit of mammary development. 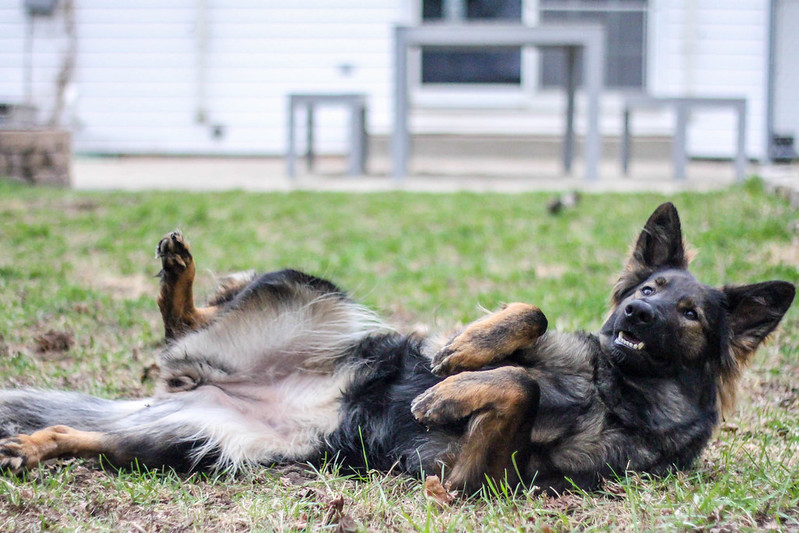 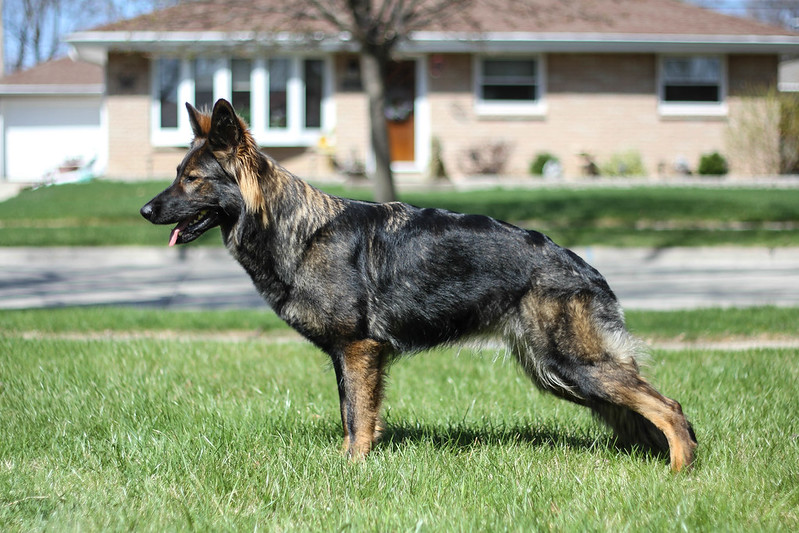 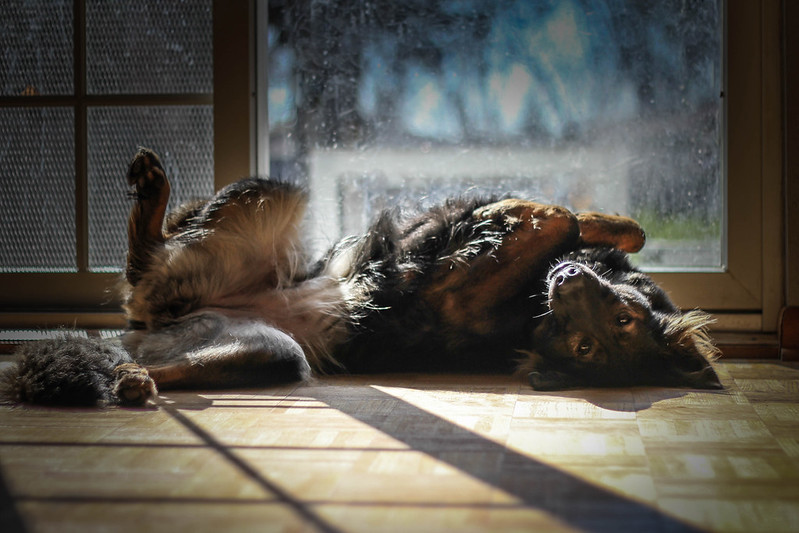