Joined May 27, 2012
·
5,304 Posts
I have made Mac and cheese, meatloaf, spaghetti, and pizza. I have sourdough starter and made pancakes, English muffins and banana bread. I’m running out of ideas. I tend to prefer lower fat foods, but as you can see, not always. Does anyone have any good dinner ideas? Meat or meatless are fine. My feeling is that as long as we are stuck at home, every meal should be a comfort meal.

I'm making chicken and biscuits tomorrow. I made Mediterranean Au gratin this weekend. There is a recipe for sourdough pretzels I want to try.

Joined May 27, 2012
·
5,304 Posts
The pancakes were a little dry but they were 100% whole wheat. I switched to all purpose and they are better. I made English muffins today and ate them warm. So good.

You reminded me of soft pretzels. I had a recipe and never got to it. I have no yeast so anything I make needs to use sourdough.

Joined Mar 8, 2014
·
6,278 Posts
How about chicken pot pie?I use the Pillsbury recipe.I do make the gravy thicker than the recipe though,it is too runny.Or leave the gravy thin and add cooked noodles to make a casserole instead of pie.Put some cheese on top and bake for 15minutes.Mega calories
► Show Full Signature
Terri

Joined May 27, 2012
·
5,304 Posts
Cinnamon rolls sound delicious. I just got new cinnamon. Dogma, that would be delicious and comforting, and I think I have what I need to make it. I just went to the market and got ingredients to make real Italian meatballs, it’s been so long since I made my own. I usually buy them. 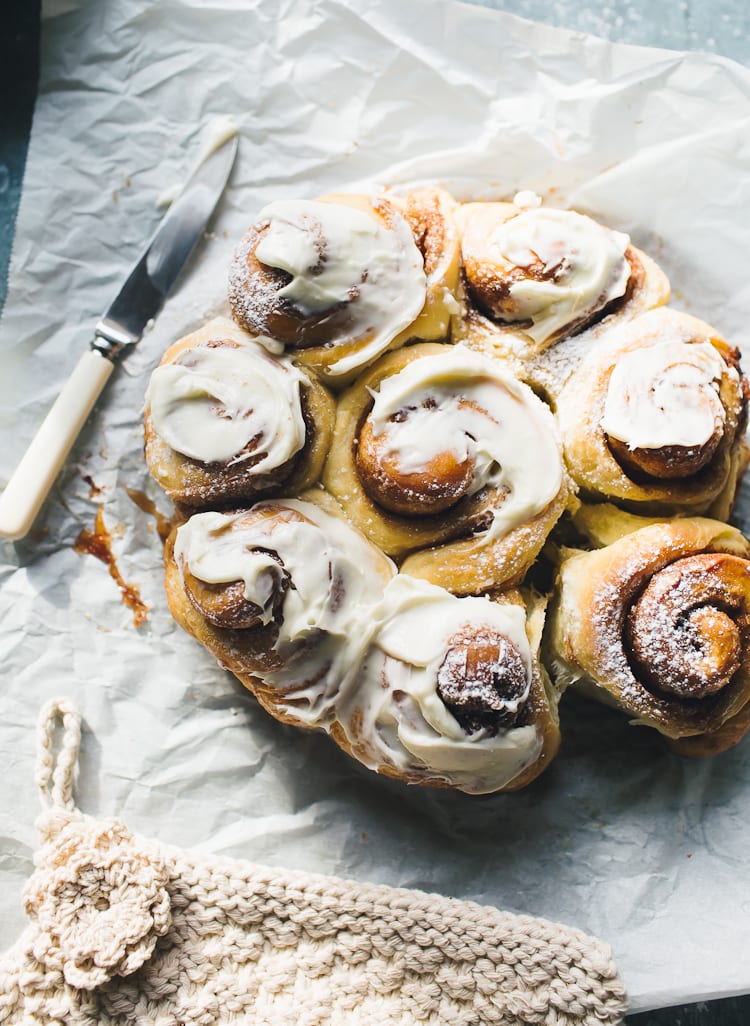 Learn how to make delicious, overnight sourdough cinnamon rolls from scratch. It's an easy, make-ahead recipe. Perfect for holiday and weekend breakfast.

Next time, I'll make the dough in the morning and let it rise during the day, cut the rolls and do the 2nd rise in the fridge over overnight.

I took this recipe and make 1 1/2 times. it makes 2 pizzas with 6 perfect slices
https://www.thespruceeats.com/sourdough-pizza-crust-4797942

Joined Mar 30, 2003
·
32,230 Posts
I have a private Pinterest page just to store recipes, as well as lots of cookbooks. It's nice that both my husband and I like to cook. I've been cooking and baking since I was a kid, he taught himself about 10 years ago. We tend to make different things for the most part, although I haven't made jambalaya or red beans and rice in a long time since Tom found his own recipes online and started making them. We have a pretty extensive and eclectic pantry, and since doing Blue Apron about once a month for the past few years and being exposed to cuisines I'd never cooked before, I've been branching out. In addition to the usual Italian, Mexican, and Cajun dishes and the occasional Asian stir fry, I've done some Thai dishes and Moroccan dishes lately. They do tend to use ingredients that not everyone is going to have on hand, though. Here are some dishes I've made recently that were terrific, all of them made at least two meals for the two of us: 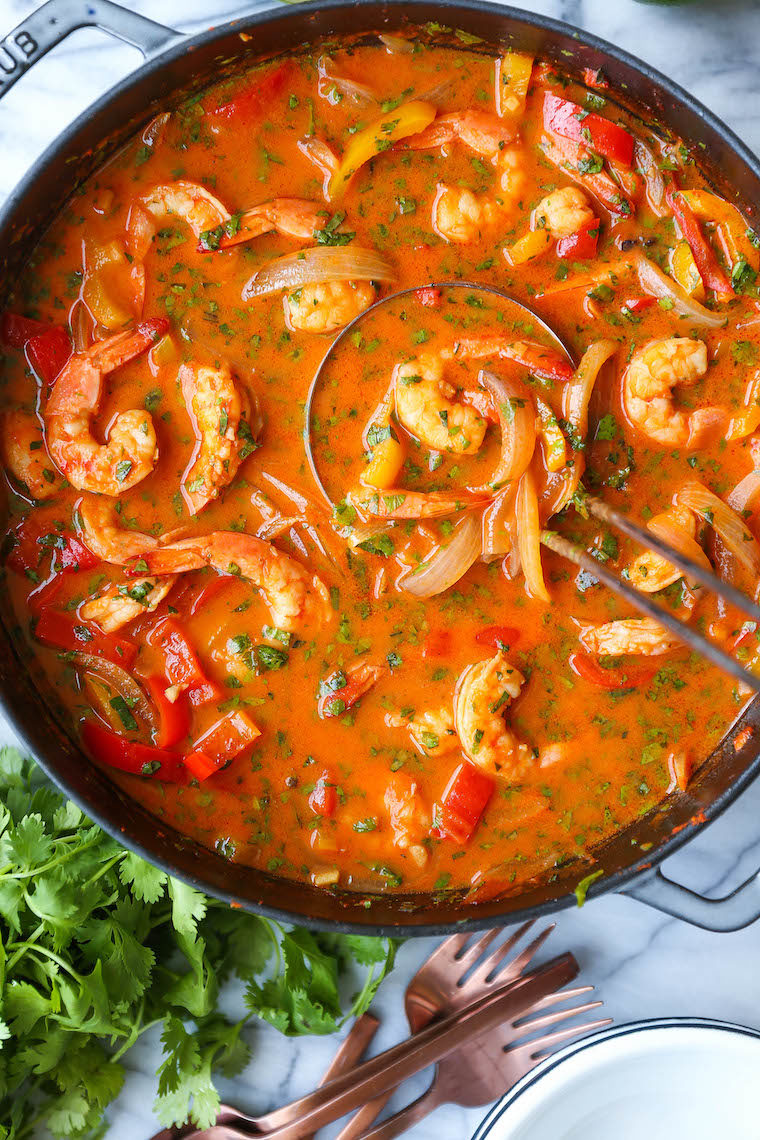 Thai Coconut Curry Soup Recipe - This will be your go-to Thai curry soup! Serve with fresh Thai basil, cilantro and lime juice. So cozy, so good.

damndelicious.net
I used yellow curry paste instead of red since that's what I had, and regular basil - I've never seen Thai basil in stores around here. I simmered it much longer than the recipe calls for before and after adding the coconut milk, and as always, more garlic. This was super yummy!

We both really liked this too :Creamy Tomato Chicken and Chorizo Pasta | Sprinkles and Sprouts
The smoked paprika made the dish. I seasoned the chicken breasts and cooked them separately in a cast iron pan, then sliced and added at the end so they didn't overcook. I doubled the cream and spinach, increased the garlic, and cooked the sauce longer.

And this gnocchi was decadent - definitely NOT low fat, but worth the calories: Gnocchi with Pomodoro Sauce (Easy & Flavorful!) | foodiecrush.com
I sautéed and discarded the fresh herbs as the recipe called for, but then added some fresh and dried herbs to the sauce as well as fresh basil on top, which I had left over from the soup. We found a two-pack of shelf stable gnocchi at Costco, so I'll probably be making this again unless I find another recipe that sounds good in the meantime.

Oh, and a couple of weeks ago I did this roast chicken with Cuban mojo marinade: Cuban Mojo Chicken | Lemon Blossoms
I had a chicken in the freezer from Costco and wanted to do something different with it. I've used Cuban mojo on grilled chicken breasts before and also on pork shoulder but never a whole chicken. I cooked it in a dutch oven and it was so good. There was enough chicken left after eating it twice to make Sopa de Lima, a Mexican chicken and lime soup - two more meals.

This soup was really good too, I made it a few weeks ago: Olive Garden Pasta e Fagioli
I added the pasta to each serving so I could reheat the rest of the soup for the next night and it wouldn't be mush. 1/3 to 1/2 a cup of dried small pasta was perfect for two servings, I cooked that each night, putting some in the bottom of each bowl, then ladling the soup over.

This is really good too, I've made it a couple of times: Chicken Scarpariello with Sausage and Peppers Recipe
I used boneless thighs and instead of the roasted potatoes I think I did parmesan orzo on the side.

Me too but I have chocolate chip bars and a fruit pie I just made, plus English muffins. Next week!

dogma13 said:
In a couple of months we'll all be trading low fat recipes and the best way to lose ten pounds
Click to expand...

dogma13 said:
In a couple of months we'll all be trading low fat recipes and the best way to lose ten pounds
Click to expand...

i lost weight the first month. My markets were empty and I began eating smaller portions in case we ran out. After a month of that, I noticed my clothes were looser. So now I have a few pounds to play with.

Shadow Shep said:
I was already wondering the best way to lose more than ten pounds😆
Click to expand...

Portion control. Eat what you want but limit portion size.