Joined May 27, 2012
·
7,516 Posts
The AKC sets guidelines for breeding ages which are much younger or older than we recommend here. Why are their rules so extreme? 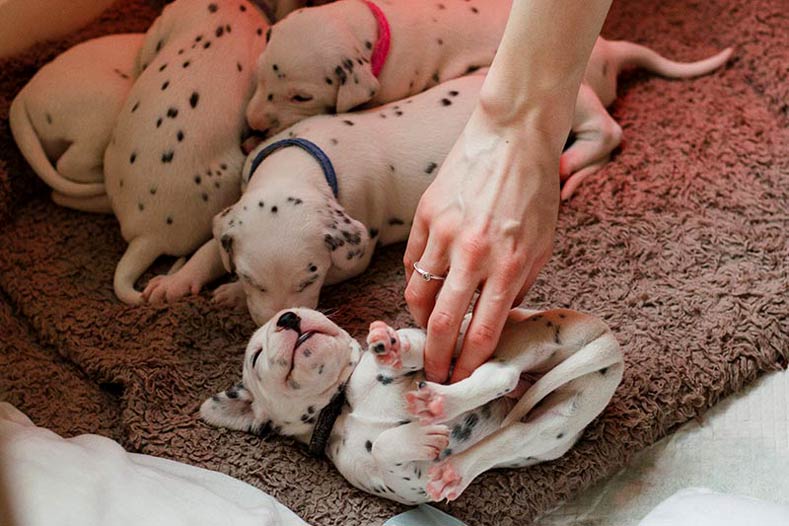 Joined Aug 29, 2019
·
2,813 Posts
The AKC is an all breed kennel club. They don’t even like making rules like that in the first place. Their breeding rules are more about record keeping than the dogs. The sv won’t allow litters past 8 years for females. Most breeders retire females with from breeding before they are close to the end. I would say it’s based more on the health and condition of the dog than actual age. When you breed older females, you get smaller litters, you are more likely to have stillborn, and you are more likely to lose some at birth.

Joined May 27, 2012
·
7,516 Posts
I was still surprised at both their upper and lower limits. I’ve seen age 8 listed here but even that seems old for many females. A friend used to take retired small breed dogs from a breeder she knew until the woman retired. By age 5 when she got them, the females looked worn.

Jazmine Auf Der Marquis
Joined Apr 10, 2020
·
711 Posts
Our Breeder will do one more litter with our pups dam and then retire her at age 8.

LuvShepherds said:
I was still surprised at both their upper and lower limits. I’ve seen age 8 listed here but even that seems old for many females. A friend used to take retired small breed dogs from a breeder she knew until the woman retired. By age 5 when she got them, the females looked worn.
Click to expand...

Bred back to back for 4 years, maybe?

wolfy dog said:
Bred back to back for 4 years, maybe?
Click to expand...

I believe that is what they do. The dogs are kept crated all the time. It sounds awful.

Joined May 27, 2012
·
7,516 Posts
She claims it was small breeder who keeps the dogs in her home. I wasn’t convinced. But I don’t want to get too far off subject. What age do your breeders retire females?

bearshandler brings up a key point... the akc is an all breed kennel club. i share the same feelings as you about their upper and lower limits, but small dogs tend to mature faster and live longer.

Joined May 7, 2005
·
32,307 Posts
I had a friend of mine tell me she had a nice litter out of a bitch who was 10. But 8 seems to be the oldest I feel it is ok and usually the litter is bred before the bitch turns 8. But mostly I go with what Fodder said. It is not about ages or numbers it is about the condition of the bitch at the time she is in heat, and it may have something to do with her recovery after her last litter, and the numbers of pups she had. If a bitch raises 3 pups and does not bounce back right away is a little different than a bitch having 11 and raising 9 pups. We take everything into consideration. If she has lost considerable condition that leaves her appearing underweight and out of coat when the pups are 8 weeks old, that might be ok, but within a month or two of that, she should be back to her old self. If not I would not breed her that heat cycle, and maybe retire her early.

I hear a lot about back to back breedings. We love to compare dogs with humans so let's consider a good Catholic human (no contraception of any kind), with a group of stair-steps. Let's say she has 5 children 1 year apart, and lets consider another having five children 2 years apart. Now the first is pregnant for 9 months, delivers a 8 pound baby and within 3 months she is pregnant again, over and over, while she is still breast-feeding and having sleepless nights, chasing preschoolers around, potty training, and running the eldest ones to school. Pregnancy lasts 9 months, parenting 18-40 years. The second mother is pregnant nine months, has 15 months of non-pregnancy and then pregnant again, while the last baby may be still breast-feeding, and maybe it is a little easier with the schedules with the spacing, but we're concerned mostly with the wear and tear on the body.

Dogs and humans are both mammals, meaning we bear our young alive and produce milk, have hair and probably other stuff, so we have this motherhood in common. But it is way different. A woman has a baby that range from 6 pounds to ten on average full term. Usually one baby but multiples will be smaller. A bitch has a litter of babies, that are typically 1 pound in weight. Nine one-pound deliveries within 18 hours in a creature that weighs about 70 pounds may be harder or easier than a 130 pound woman having a 7-pound baby. Hard to say. But beyond the similarities are a lot fewer. For instance the woman is pregnant for 9 months, but bitch is pregnant for 9 weeks. That's a huge difference. And a mother will breast feed up to 2 years, more or less, and after that she is responsible for this creature for a minimum of 18 years. And she knows it. She knows that things she does can affect him down the line. I mean the human has a special stress of parenthood, that dogs don't have. The bitch is done with her puppies after 8 weeks. She then has a minimum of 2 months to recover after the babies go to their new home. Paralleling that to humans: a mother would be pregnant for 9 months, then 9 months later her baby moves on, and she gets another 9 months to forget the whole ordeal and regain her strength, before beginning the pregnancy cycle again.

Don't get me wrong, mostly, I breed once a year, just because I prefer to have puppies when it is nice enough for them to have some time outside. I have bred back to back, with no ill-effects, with both Bear and Karma, But as I say, I prefer to have litters in the spring, so that makes it once a year. I think humans having babies 2 years apart is kind of ideal because the children are close enough in age to play with each other and grow up together, and that is certainly common. That would be similar to a dog being bred back to back. 2-3 years between children. One litter per year would translate in humans 9months pregnant, 9months breast-feeding, 36 months before being pregnant again, so the kids would be more than 4.5 years apart. And no one sees any problem with women having babies 2 years apart. So we shouldn't worry over much about a bitch having puppies twice in a calendar year. They cannot have 3 litters in a year. They go into heat every 6-10 months. So, God created in them a limit switch. And the dam has none of the raising babies right stress, she is not worried that her pups are properly socialized, house trained, and even the doggy-equivalent of puppy raising. She plays with her puppies, she weans them, she can be under considerable stress for the first week or so, especially if one or more is not thriving, and if she loses some, but after the first week she really doesn't have any stress, whereas the human mother's stress has only just begun.

Of course, if you are feeding crap food, and have a parasite load on the dam, then she very well may be "worn out" by the time she reaches 5 or 6 years old. Ah well, the short answer is that there is nothing wrong with having two litters from a bitch in a year's time.
1 - 13 of 13 Posts
Join the discussion
Continue with Facebook
Continue with Google
or sign up with email
About this Discussion
12 Replies
6 Participants
Last post:
selzer 2 mo ago
German Shepherds Forum
A forum community dedicated to all German Shepherd owners and enthusiasts. Come join the discussion about bloodlines, training, breeding, service dogs, and more!
Full Forum Listing
Explore Our Forums
General Information Pictures! Pictures! Pictures! Health Issues General Puppy Stuff General Behavior
Recommended Communities